Each Memorial Day (once called Decoration Day), in May, large crowds gathered for programs of speech-making and hymn-singing. The several Lithuanian war veterans posts traditionally participated. A list of these annual speakers includes figures known as atheists, leftists, or socialists, including Dr. Jonas Sliupas.

With the passing of time, originally an expression of independence if not ignorance for the Catholic Church, the leftist character of the institution mellowed. The cemetery gradually attracted a minority of churchgoers among its supporters who began making use of the burial facilities. A generation later with the new wave of the Lithuanian diaspora after World War II, the climate had radically evolved. The followers of the Lithuanian Evangelical Lutheran church started using these national premises. Famous Lithuanian writers, artists, musicians, politicians, community leaders have found their final rest at this cemetery. 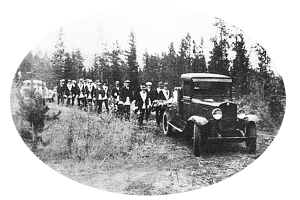 Monday - Friday 8 am to 4:30 pm Saturday 8 am - 10 am Longer by appointment or scheduled funeral. Sunday Office is closed.